3R are not enough. We need 5Rs 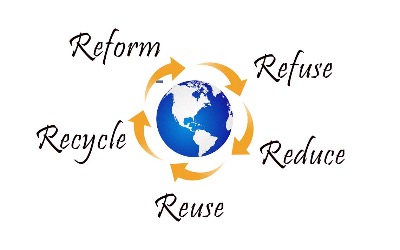 Reduce, Reuse, Recycle. That is what we all have been hearing for a long time. And then one more R was added to it, which is Refuse. At Streetbell.com we think that is not enough. We need 5Rs. And the first of all these should be the R that we call “Reform”. Without an initiative to Reform the industries and the societies, we will not be able to teach and get the message out there to the masses to do the following Rs of reducing, reusing and recycling. Because these refusing, reducing, reusing and recycling come only at a later part, whereas Reforming the society comes as the first and foremost initiative we need to take. That is where we teach people of all ages and all demographies to pick up the idea, see the mistakes and misbehaves that are causing the need to Refuse, Reduce, Reuse